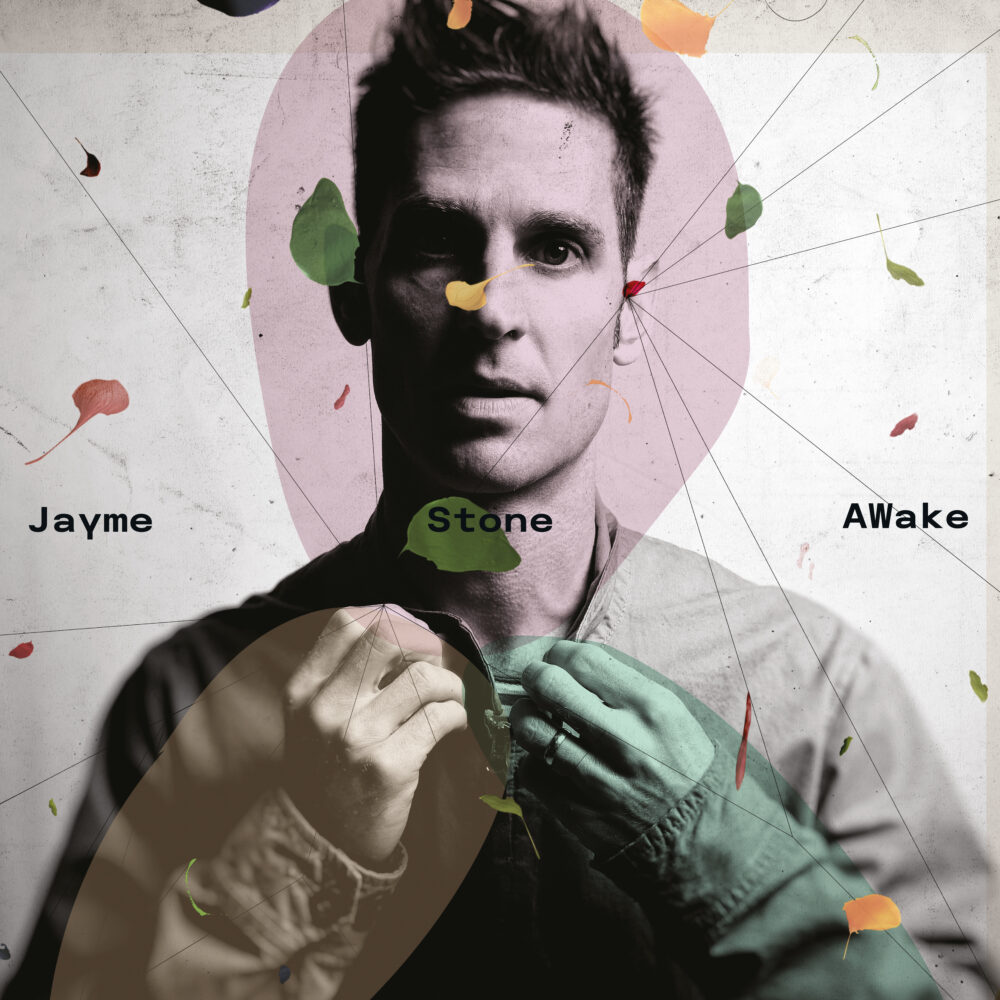 “Awake, awake, the light has come,” sings Jayme Stone in the title track of his new album; one of stargazing tales that sing from a white-hot core of love and loss. On AWake Stone breaks new ground: from folk musician and composer to experimental pop singer and producer. A unique tonal palette blends with deft storytelling and disarmingly honest lyrics to create a sonic world both eminently engaging and full of nuance and surprise. Check out the immersive website now.

The songs on AWake mark a new creative start for Stone, who is best-known for his banjo playing and world-wise roots albums like Africa to Appalachia, Lomax Project, and Folklife. Now we hear Stone singing, playing guitar and OP 1 (a micro-synth, sampler and sequencer). He captures and sculpts sounds—felted piano, bass clarinet, analog synths and sequencers—until they’re hazy and unrecognizable.

“For years I knew I had these songs in me,” shares Stone. “Like I had a premonition that some future me was driving backwards in time, full of songs, and at some point, we’d meet.” In July 2018, Stone had earmarked six weeks off the road to start writing a new record. On day one, his brother Michael, a well-known teacher of yoga and Buddhism, died suddenly and unexpectedly. In the yawning ache of being brotherless, the songs became oracles—new ways to reckon with who his brother was, and who he himself was becoming. Stone sings: “What you felt, we can only guess / There are mountains hidden in hiddenness.” At times, Stone felt himself to be the keeper of his brother’s shadow, having known him so long in all his complexity. The song “Brotherless” samples his brother’s voice and quotes zen poet Dōgen’s “Mountain and Water Sutra.”

AWake consults the stars and planets for direction. In the song “Earthlight,” the sun reflects off the earth and onto the moon, capturing the mysterious ways in which the planets and constellations pull invisibly on our lives. And we feel it: the song wanders breathlessly with a sense of wonder, weaving intricate guitar melodies with unexpected offbeats and offset line-breaks, programmed drums interlaced with a drum kit, glitchy bass clarinet and vocal samples. In the glowing lostness that permeates these songs, we zoom through space as we listen: witnessing the invisible tug of forces we can’t control on our bodies and our lives.

“Mouth the Words,” conjures the tumult and tenderness of Saturn return, that time in our lives when we reckon with the past to renew our lives for the future. “Strike a spark / Wrap your arms around the dark / Stars align Saturn turns / Redesign everything you ever learned,” sings Stone, full of forgiveness and hope. In the sun-drenched, Afro-pop sparkle of “Future Promise,” a couple rolls up their sleeves to re-make a relationship in danger of sinking. Voices crackle through cell phone static, two people trying to hear and to be heard.

“My Woman’s a Nation,” is a song about long-term love, a touring musician’s love letter home—”My idol my altar / My sister my maker / My heiress my daughter / My circuit my breaker.” Sounds and styles cross-pollinate: the warm glow of a Prophet synth, surround sound back-up vocals and a bridge that draws from spoken word. “Wait for Heaven” features bursts of pitched up vocals and kaleidoscopic hooks in the song’s upper atmosphere.

AWake was recorded at Figure 8 in Brooklyn, a space that feels more akin to a community center or Japanese monastery than a studio. Entering from the street, musicians take off their shoes and walk through the kitchen with farmer’s market produce on the counter. The studio, made of reclaimed wine barrels, cork and felt, is drenched in sunlight. The studio’s owner, Shahzad Ismaily (who also guests on the album) has a dizzying collection of rare synthesizers and one of world’s few Klavins Una Corda keyboards (which anchors several songs on the album).

Stone has made a rare thing: a piece of work that asks us to both travel on his melodic and emotional journey and allows us to have our own.