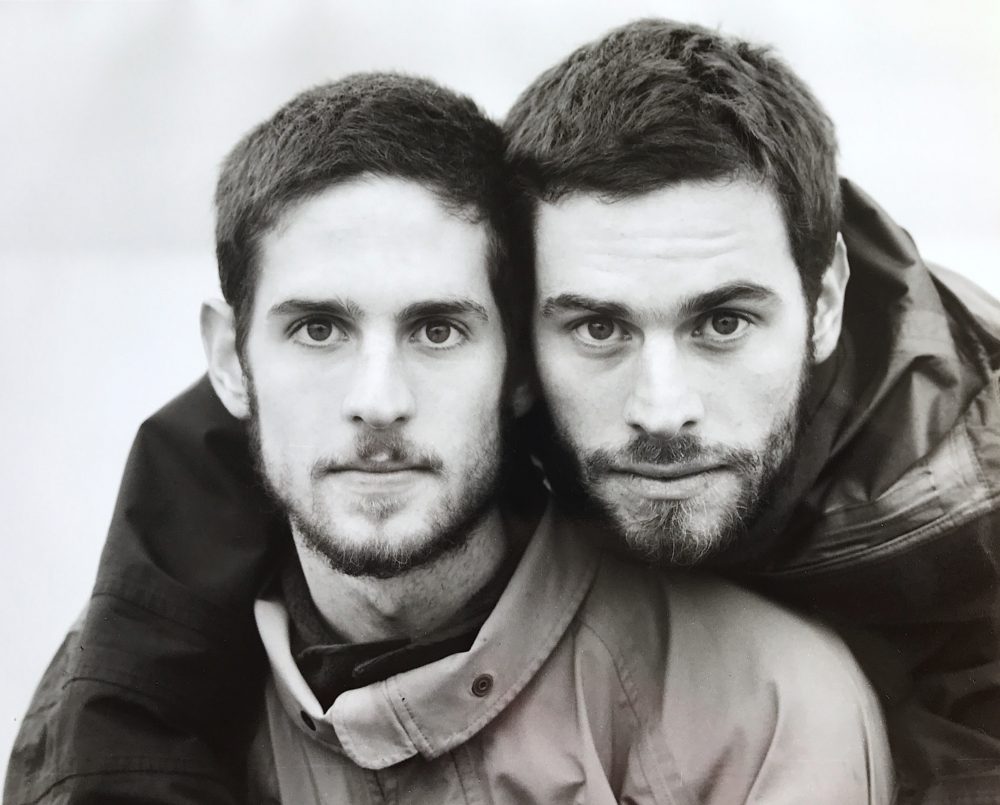 A Wide Wake
On My Brother’s Passing

My brother, Michael Stone, passed away on July 14th. He shaped my life more than anyone I’ve ever known. My love for him is immense and is only growing stronger through the experience of his passing. I’m writing to share the story of how he died but it’s really the story of how he lived.

Michael’s spirit has always felt unmistakably deep. His penetrating blue eyes, boundless curiosity, and mercurial imagination. His ability to tap into the zeitgeist of a community, to connect with the ethos of a place. His wildcardness, his wideopenness. His sheer beauty, kindheartedness, and rich capacity for intimacy. From the time we were children, Michael had a powerful effect on everyone around him. Many experienced him as magnetic, larger-than-life, and mysterious. He was a natural leader and a teacher.

Michael’s charisma also had the effect of hiding a deeper woundedness. He was someone who struggled intensely in his own life. In his teaching, he talked so much about the truth of suffering but rarely shared the extent of his own experience of it. He had a Moses-come-down-from-the-mountain kind of personality (his Hebrew name is Moshe)—able to share his wisdom with startling clarity, but protective of his own inner process. Few people saw the burning bushes inside of him. I have always seen them, though this knowledge mostly stayed sealed inside the sacred bond of our brotherhood.

Michael lived with mental illness. In childhood it was simply anguish. In his teenage years, what the doctors called mono was more likely clinical depression. When in his twenties, he ran from his dream of becoming a race-car driver we called it a nervous breakdown. For a long time, his illness returned about once or twice a decade. As he got older, it began cycling through more and more rapidly. The highs got higher, the lows lower. Michael was diagnosed with bipolar disorder.

Mental illness is not new in our family. It runs like a quiet, underground brush-fire through the generations. Our uncle Ian was diagnosed with schizophrenia in his late teens, and we witnessed both the magic and the hardships of this disease. He was like a slow-burning fire: the room was always smoky. Michael was more like one of those Pacific redwoods who could have a section burnt black while still growing strong, even thriving—eventually providing sap and shade for others. Michael often kept his mental health struggles hidden, even from those nearest to him. It was stunning and sad to see some of his closest relatives find out about his illness for the first time as they stood over him in a coma, tears pouring down their faces.

Despite these difficulties, Michael prospered. He was able to translate yoga and Buddhist practices into tools and teachings for thousands of people. He taught courses and led retreats around the world and on the internet, which he felt had the potential to be a worldwide monastery without walls. He was able to create spaces that were inclusive and collaborative, bringing together secular spiritual seekers, artists, healers, and outsiders. Michael published five books (and has four due out in 2018), and is the subject of a film that documents his pilgrimage to post-Fukushima Japan. Michael’s singular voice was able to connect ancient teachings with contemporary life, embracing social action and the arts. He was an extraordinary human being.

In recent years, Michael began talking more openly about mental illness in our culture. He was attempting to create a safe space for others to accept their difficulties and I believe he was on a path to sharing his own. He started speaking publicly about his melancholy states. In June, he spoke at a conference on Psychedelics and the Buddhist Path at Spirit Rock. He told me he was thinking about putting his medications on the podium in front of him and finally opening up about the extent to which he struggled with his mental health. It was something I’d long wished he’d do and I felt proud of him. He never did take that step, but I do believe he was getting close to it.

Among the immeasurable gifts that his wife Carina brought into his life—and they are innumerable—was an acceptance of Michael that included the challenges he had with his own mind. She was the first partner to see his struggles and love him in all his complexity and humanity. Michael’s relationship with Carina was profoundly healing and transformative for him. He thrived, wrote more prolifically than ever, and began repairing old relationships, including our own. The unshakeable alliance forged in our childhood had given way in our twenties to a painful but necessary differentiation, but now we began to reconnect.

Michael and Carina’s wedding vows included a pact to be partners in caring for his mental health. For the first time, Michael began, under the care of a psychiatrist, to take medication to treat his bipolar disorder. It was a huge step and the beginning was rocky. Tinkering with your brain chemistry is not an exact science, marked by all kinds of setbacks.

After considering alternatives, Lithium salts, the classic treatment for bipolar disorder, was found to be immensely helpful. Lithium is a soft, silvery-white alkali metal—the lightest solid element on earth. Michael felt it had a numinous quality. It was effective for a year at which time it started to cause strain on his kidneys. It was recommended that he very slowly lower the dose and augment it with other medications. Michael was deeply disappointed that the chemical tightrope-walk was about to begin again.

I can only imagine how difficult it was to be inside Michael’s mind at times. The tumultuous ups and downs, the difficulty of discerning which feelings were trustworthy and which were distorted either by his illness or by the effect of pharmaceuticals. Added to this were the pressures of balancing an incredibly busy, international teaching schedule with his unwavering commitment to his family. I know he often just wanted a break; a respite of tranquility and ease.

The week before his death, Michael seems to have entered a new kind of manic spell. His psychiatrist made a significant shift in his primary bipolar medication’s dosage. His sleep patterns were off. He expressed to his wife that he was anxiously trying to avoid mania. Outwardly though, he was generous, loving, and calm.

On July 14th Michael woke at 4am. He couldn’t sleep. Before his family awoke, he’d caught the ferry to Victoria for a day of errands, as planned. Carina called first thing to check in. He said he wanted her to keep calling all day. He bought bath oils for her, got his hair cut, and called friends as he often did on these day trips. I’ve listened several times to a message he left me that day. He sounds buoyant. He says to call anytime—he’d be around all day, home the next, and then off to Hollyhock for a retreat with his family.

Michael stopped answering his phone in the early afternoon. He wasn’t on the ferry he had planned to catch. Carina worried and called the ferry terminal asking for them to page and look for him. They told her to wait, that he would surely be on the next one. When the last ferry arrived without him, she filed a missing persons report with the RCMP. They began a search immediately, knowing his history and need for medication. He was found around midnight, unresponsive, breathing, with a heartbeat, but unwakeable.

I believe that this was the first time Michael had tried opioids. That morning, he had researched getting a medical prescription. When that failed, he bought them on the street. That he did this so unceremoniously is quite uncharacteristic of Michael, who loved ritual and cared deeply about doing things with style. Whatever he took had a catastrophic effect.

The initial toxicology report shows that Michael had opioids, including fentanyl, in his system. The CBC recently reported that in 2016, 914 people died from drug overdose in British Columbia alone and fentanyl is said to be largely responsible for this epidemic. It’s heroin’s synthetic cousin—a drug so powerful that a dose the size of a grain of sand can be fatal. Drug traffickers have been known to mix it in with other street drugs, often unbeknownst to their recipients.

By the time the paramedics came, Michael was in a coma and had lost all brain function. He was kept on life support while his family gathered to be with him one last time and so that organ transplant matches could be found. Three families received Michael’s lungs and kidneys. Some lucky being is out there breathing through his magnificent lungs right now.

I have spent many hours trying to understand how this could possibly have happened. There are so many questions, but they all spin around a central one: What was Michael thinking? We know that for people with bipolar disorder, manic episodes are marked by a lack of impulse control, risk-taking behavior, and little regard for consequences. Did he know what he was taking and how much? Was this behavior the result of a change in his medication? From what island in his mind did the idea get telegraphed in the first place? My own deep love for him wants to know above all: How deep was his suffering in the moment he made that fateful choice? What did he need?

Michael was very fond of koans, those paradoxical story-riddles Zen Buddhists use to reveal the limits of logical thinking. They are designed to push the mind into a new frame of perception and possibly through enough frames-per-second that we are able to experience the empty and contingent nature of all things. Michael often used koans as a teaching tool. The story of his death may have left us with the most perfectly impenetrable one of all.

I arrived at the hospital in the middle of the night, stunned, in shock, my heart broken wide open. Even amidst the tangle of wires from his life support, Michael’s body was radiant. He looked vibrant, glowing, and peaceful. My time with Michael over the next three days is deserving of another epic story, or perhaps a song or symphony. Likely a lifetime of them. What I can say now is that it was one of the most transformative experiences of my life thus far. I slept pressed up against him, witnessed healing moments with loved ones, felt our brotherly bond to the bone, and appreciated Michael in all his humanity. I felt a love so immense that it included immeasurable presence, forgiveness, and trust. It will remain one of the most moving experiences of my life.

Carina, Erin Robinsong and I spent our last several hours with Michael poring over his beautiful body, washing him head-to-toe, chanting, singing, doing rituals, and preparing his body for organ donation. Carina was loving, brave, and compassionate. I felt deeply satiated knowing that with her he experienced seven years of the utmost love. We watched over Michael until the end. It was a wide wake.

Michael left so much in his wake: a beautiful family, a potent body of work, a sangha of seekers around the world who have been moved by his teaching, and an astoundingly deep life. It is a wide wake. Let us stay wide awake.

Click here to support Michael’s wife and children in a very tangible way.